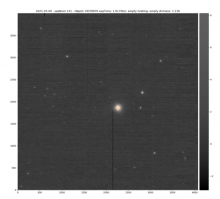 June 4, 2019 - When it comes to moving enormous pieces of LSST equipment between floors of the summit facility building, an ordinary cargo elevator just won't do. Instead, a heavy-duty, vertical platform lift will carry the assembled mirror and camera subsystems 78-feet (23.8 meters) between the telescope and maintenance floors of the LSST observatory. The heaviest load to raise and lower will be the combined weight of the Primary Tertiary Mirror (M1M3), mirror cell, transport cart—close to 80 tons (72.5 metric tons)!

The final test campaign for the lift, which was designed and fabricated by PFlow Industries, was completed in April 2019. For this series of tests, the lift was loaded with seven barrels containing approximately 18,500 gallons (70,000 liters) of water. With this ballast, the weight of the tanks themselves and the detachable lift-up roof, the lift successfully raised about 94 tons (85.5 metric tons) of weight. This simulates the maximum payload of the M1M3 mirror and cell on the transport cart and factors in the weight of the roof section (which isn’t technically part of the payload).

The lift, custom-made for LSST, allows the carriage to travel all the way up to the eighth level of the building: the telescope floor. The lift-up roof weighs about 15 tons (13.5 metric tons), and rises 25 feet (7.6 meters) higher than the top of the shaft. In its highest position the lift carriage would obstruct the rotation of the telescope dome, which is why the roof wasn't installed permanently at this height—when the lift carriage is lowered, the roof section also lowers and securely locks in place clear of the rotating dome.

The lift carriage is a ≈33-foot square (≈10-meter square) platform that rests on sturdy supporting seats installed on its six support columns at each of three served levels. During use, six double sets of heavy chains raise the platform smoothly and evenly to protect the load inside. If the tension in the chains becomes uneven for any reason, safety cams automatically engage to prevent falling. The lift is operated using a main control panel on the eighth level of the building, and a well-marked "emergency stop" button allows the operator to immediately halt the motion of the lift if any problems occur. The lift was also designed with redundancy in all critical components so that if one component fails, the load won't be in danger of falling. The leveling of the carriage and deck is key for the system to succeed. Major components have been aligned so precisely that, as LSST Engineer Freddy Muñoz describes it, “when hanging from the chains, the carriage constraints are so smooth that the carriage can be moved by hand.”

Because Cerro Pachón is such a seismically active area, the lift was designed to withstand earthquakes of up to 8.0 on the Richter scale. It will also be able to tolerate the strong winds that are common on the summit, although LSST Site Manager Eduardo Serrano confirms that "the lift will only be used to move cargo when the weather allows for safe and protected transport."

Now that it has passed the required tests, the lift will soon be used to install the various LSST systems on the telescope floor. Later, during Operations, it will transport systems back down to the maintenance floor as needed. For example, both the M1M3 and the Secondary Mirror (M2) will need to be washed and re-coated periodically at the Coating Plant on the third level of the building, and then returned to the telescope floor.

According to Jeff Barr, LSST Telescope and Site Architect, "everyone involved with the design and installation of the lift—especially the Pflow engineers, LSST engineers Freddy Muñoz, Juan Fábrega and the entire team in Chile—contributed tremendously to achieve the successful load testing of the lift and all the work that led to this major accomplishment."