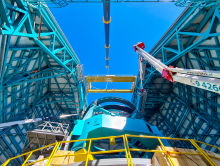 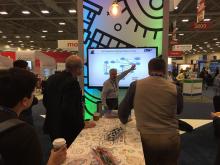 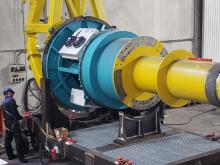 M1M3: Out of Storage at Last

October 26, 2018 - A week after the Primary/Tertiary Mirror (M1M3) Cell was moved to the Richard F. Caris Mirror Lab on the University of Arizona campus, the M1M3 Mirror was also moved to the Mirror Lab from a hangar at Million Air, where it has been stored since its fabrication in 2015.

The Mirror left the hangar at Tucson International Airport on a specialized trailer from Precision Heavy Haul and arrived at the Mirror Lab at approximately 4:00 a.m. on October 18th. As with the M1M3 Cell move last week, the Mirror waited outside the Lab until the outside air temperature warmed to the accepted level, and then was moved inside the building. The designated LSST workspace inside the Mirror Lab now accommodates the Mirror, the Mirror Cell, and the Mirror lifting fixture, so some strategic rearranging was done to ensure the space was used as efficiently as possible.

Now that both the Cell and the Mirror are in the Lab, the next step is the installation of the Mirror onto the M1M3 Cell using the vacuum lifter.

October 19, 2018 - This is a truck you definitely don't want to be stuck behind. Very early in the morning (3:10 a.m., to be exact) on Wednesday, October 10, the vehicle carrying the LSST Primary/Tertiary Mirror (M1M3) Cell departed CAID Industries in Tucson. The M1M3 Cell, which is the steel structure that will support LSST's 8.4-meter mirror, weighs approximately 55,000 lbs.

The Cell had been loaded and secured on the truck the day before the move by teams from Precision Heavy Haul (PHH) and CAID, with oversight from Tucker Booth, LSST Telescope and Site Mechanical Engineer. The move itself was scheduled for the quiet morning hours to minimize disruption of traffic, and to minimize stops for the truck, which required more than two lanes of clearance when loaded with the Cell. Accompanied by three pilot vehicles and two state troopers, the truck and its oversized cargo made its way to the Richard F. Caris Mirror Lab on the University of Arizona campus, arriving just before 4:00 a.m.

There was a pause in the action once the truck arrived, because the big, rolling door through which the Cell would enter the Mirror Lab couldn't be opened until the outside air temperature was within 10 degrees Fahrenheit of the Lab's inside temperature. This regulation exists to protect the mirrors currently being fabricated in the Lab from damage caused by abrupt temperature swings. While the group waited for the temperature to rise, the interior of the Mirror Lab was prepared for the acceptance of the Cell.

Teams from PHH and the Mirror Lab also used this time to move the truck into place and position the crane that would lift the Cell into the building. They also performed some test lifts of the Cell using the crane and nylon slings, to ensure the load was balanced correctly. At about 7:30 a.m., the door was cleared to open and the Cell was lifted off the truck and into the Mirror Lab.

"Everything went smoothly, thanks to the crews from CAID, PHH, and the Mirror Lab," said Booth. "Because they had things so well under control, my biggest challenge that morning was finding a 24-hour donut shop."

This week, a similar process will take place with the M1M3 Mirror itself, which will be moved from its airport storage facility to the Mirror Lab. Over the next few months, the Mirror and Cell will be integrated, and the fully assembled system will be tested thoroughly before being disassembled and shipped to Chile in 2019.

The transport cart for the Primary/Tertiary Mirror (M1M3) Cell Assembly, featured in this video, has been completed at CAID Industries in Tucson, AZ. On the summit of Cerro Pachón, this cart will be used to safely detach M1M3 from the telescope and transport it to the coating plant for periodic maintenance of the mirror. The cart will move along rails that are built into the floor of the observatory building, and a vertical platform lift will carry the cart between the telescope and maintenance levels of the building.

I am delighted to announce that Professor Zeljko Ivezic of the University of Washington has agreed to take on the role of Deputy Director of the LSST Construction Project, effective September 1, 2018.

September 4, 2018 - The LSST 2018 Project and Community Workshop, held in Tucson August 13-17, provided a valuable opportunity for face-to-face interactions between geographically distributed LSST project team members and participants from the LSST science community. This year’s annual gathering boasted the highest registration to date, with more than 300 people attending the meeting. Photos from the event are available in the LSST Gallery.

May the Force Balance System Be With Us!

August 27, 2018 – The LSST 8.4-meter M1M3 Mirror Cell Assembly is a busy place. It includes the M1M3 monolithic steel surrogate mirror, the mirror support systems, the thermal control system, a laser tracker interface, the supporting steel structure, various mirror sensors, and the M1M3 control system. All of these components will work together to ensure the mirror holds its shape precisely as the telescope works through the night, pointing to various locations in the sky.