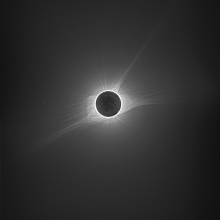 September 18, 2017 - The total solar eclipse on August 21, 2017 captivated not just the astronomy community, but the public at large. Many individuals associated with LSST traveled to the path of totality to view the spectacle for themselves and share their knowledge with others. LSST Associate Scientist Keith Bechtol gave a talk to an audience at Rabun Gap Nacoochee School in Northeastern Georgia the day before the eclipse. He used the opportunity to deliver an inspiring talk about LSST and the unique opportunities offered by ambitious science projects--even for people who don't think of themselves as scientists. Near the other end of the path of totality, LSST Systems Scientist Chuck Claver volunteered with the Citizen CATE project along the Oregon-Idaho border, camped out with his family on BLM land in eastern Oregon near Dixie.  While there, Chuck took the time to capture this stunning image of totality with his Nikon D7200 and a 200mm lens.

To generate this spectacular image, Chuck combined 240 individual images with ten different exposure levels ranging from 1/2000sec to 2sec, giving each exposure level 24 images. In the full resolution image, you can zoom in to see many stars around the eclipsed sun. Earthshine is visible on the moon and the corona extends almost to the edge of the frame.

50,000 eclipse visitors were predicted in Rabun County, GA, adding to the local population of about 16,000.  Local organizers provided family activities for 10,000 at the Rabun Gap Nacoochee School, about 600 of whom attended Keith’s presentation. Keith had prepared the presentation to appeal to a broad range of ages and backgrounds; a video of his presentation can be viewed on YouTube, starting about 16:30 into this video. Although solar eclipses aren't a focus of Keith's own research, he described the way that eclipses have helped us understand gravity, which is a central aspect of contemporary astronomy research, and influences subjects like dark matter, dark energy, and cosmic inflation. He pointed out that none of our GPS mapping programs would work properly if scientists hadn't discovered that time passes at different rates in different gravitational fields. GPS satellites, which orbit approximately 20,220 km (12,550 miles) above the surface of the Earth and experience a lower gravitational force, have to be adjusted so their clocks tick at the same rate as those on earth. That important adjustment allows our GPS devices to accurately direct us to, among other things, the very center of an eclipse's path of totality.

Keith concluded his talk with comments about the international, distributed, and diverse team needed to build a monumental science project like LSST. As Keith puts it, the big problems science tries to solve "don't have answers in the back of a book"--they will take years or decades to figure out, inspiring new questions along the way. Although scientists with PhDs in astronomy and physics play an essential role, a project like LSST also requires experts from a wide range of fields, including many types of engineering, project management, and education.  Keith's message for his audience was that it takes the combined efforts of many different people to advance science, and that anyone can help; he encouraged his listeners never to count themselves out.

After the eclipse, Chuck and his family packed up and left their deep-off-the-grid campsite.  He reports the drive out was a test of patience: more than 5 hours of nose-to-tail traffic at 7mph on a 2-lane highway. His enthusiasm undaunted, he is already planning for the July 2, 2019 total eclipse that includes Cerro Pachón on the path of totality.  We can’t wait to see those images!