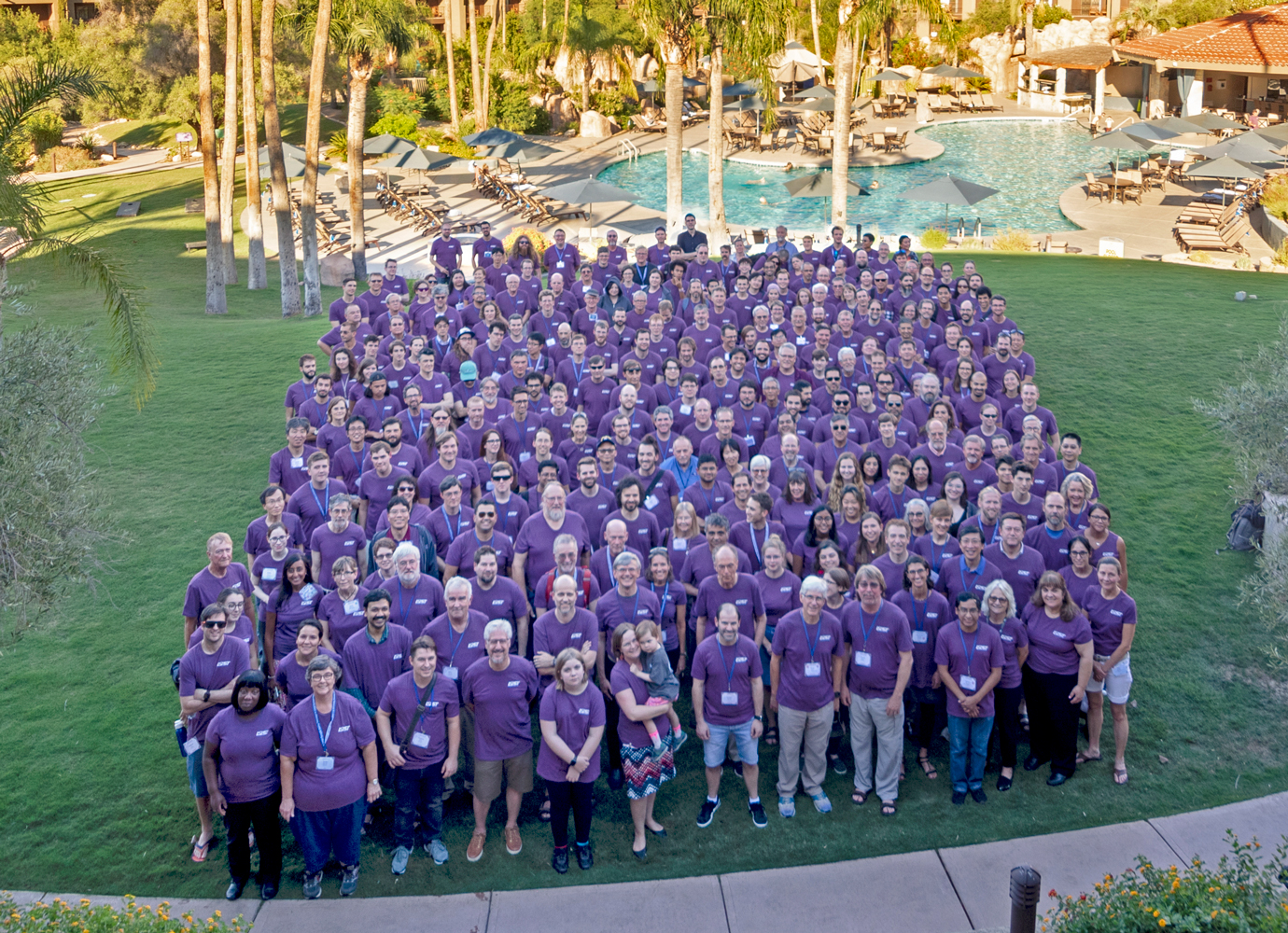 August 26, 2019 - More than 300 participants attended this year's LSST Project and Community Workshop, an annual meeting that brings together LSST Project staff, affiliates, and members of the science community to celebrate successes, report progress, and discuss upcoming challenges. This year’s meeting, held August 12-16 at the Hilton El Conquistador resort in Tucson, AZ, also offered ample opportunities for participants to interact outside of formal sessions, with early-morning soccer matches and board game nights bookending each day of the meeting.

Based on the success of last year’s program, the LSST Corporation sponsored 24 student interns to attend this year’s meeting. During Monday’s plenary session, students took turns presenting 30-second summaries of their research projects and invited attendees to bring their questions and comments to the student poster session scheduled for that evening. Photos of the poster session and a group photo are available at this link.

Wednesday’s morning plenary began with a popular feature of recent meetings, a series of “Lightning Talks” by LSST Project team members. These 5-minute talks give the invited speakers a venue to share information about their roles in the project as well as their personal hobbies and interests. The talks often feature entertaining anecdotes and photos, and are always identified as a highlight of the workshop. After Lightning Talks, representatives from the remaining four Science Collaborations gave overview talks: Stars, Milky Way, and the Local Volume; Dark Energy; Information and Statistics; and Strong Lensing.

The Thursday plenary featured more Lightning Talks followed by a presentation on Commissioning and Verification for LSST. Chuck Claver, LSST Systems Engineering and Commissioning Manager, and Sandrine Thomas, Telescope and Site Subsystem Scientist, shared progress reports and the upcoming schedule for Commissioning efforts. The talk concluded with a request for volunteers: students or seasoned professionals willing to offer their time and expertise to the Commissioning effort in exchange for a once-in-a-lifetime opportunity to work directly with the LSST system as it is assembled and tested on Cerro Pachón.

A workshop on Difference Imaging Analysis (DIA) was held in parallel with the meeting’s breakout sessions on Tuesday and Thursday. The DIA workshop offered an opportunity for LSST Science Community and Project members to address challenges related to a key theme of LSST’s mission: exploring the changing sky. Topics addressed during the two-day workshop included technical discussions of image subtraction, object classification, and community expectations of the planned LSST data products.

A public talk on Thursday evening, titled LSST and Black Holes, featured Feryal Ozel, Professor of Astronomy and Astrophysics at The University of Arizona, and Raffaella Margutti, Assistant Professor in the Department of Physics and Astronomy from Northwestern University. The speakers discussed recent black hole discoveries and what might be revealed when LSST begins its ten-year survey. LSST Project Manager Victor Krabbendam also gave an overview and status update on LSST Construction, highlighting the many milestones reached over the past year. An article promoting the talk in the Arizona Daily Star and an item that aired on KGUN-9 television helped drive attendance to this event—more than 300 people were estimated to be in the audience.

The dates for the LSST 2020 Project and Community Workshop were announced at the closing plenary on Friday; next year’s meeting will take place August 10-14 in Tucson. The venue for next year’s workshop will be announced when it is confirmed.