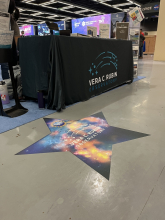 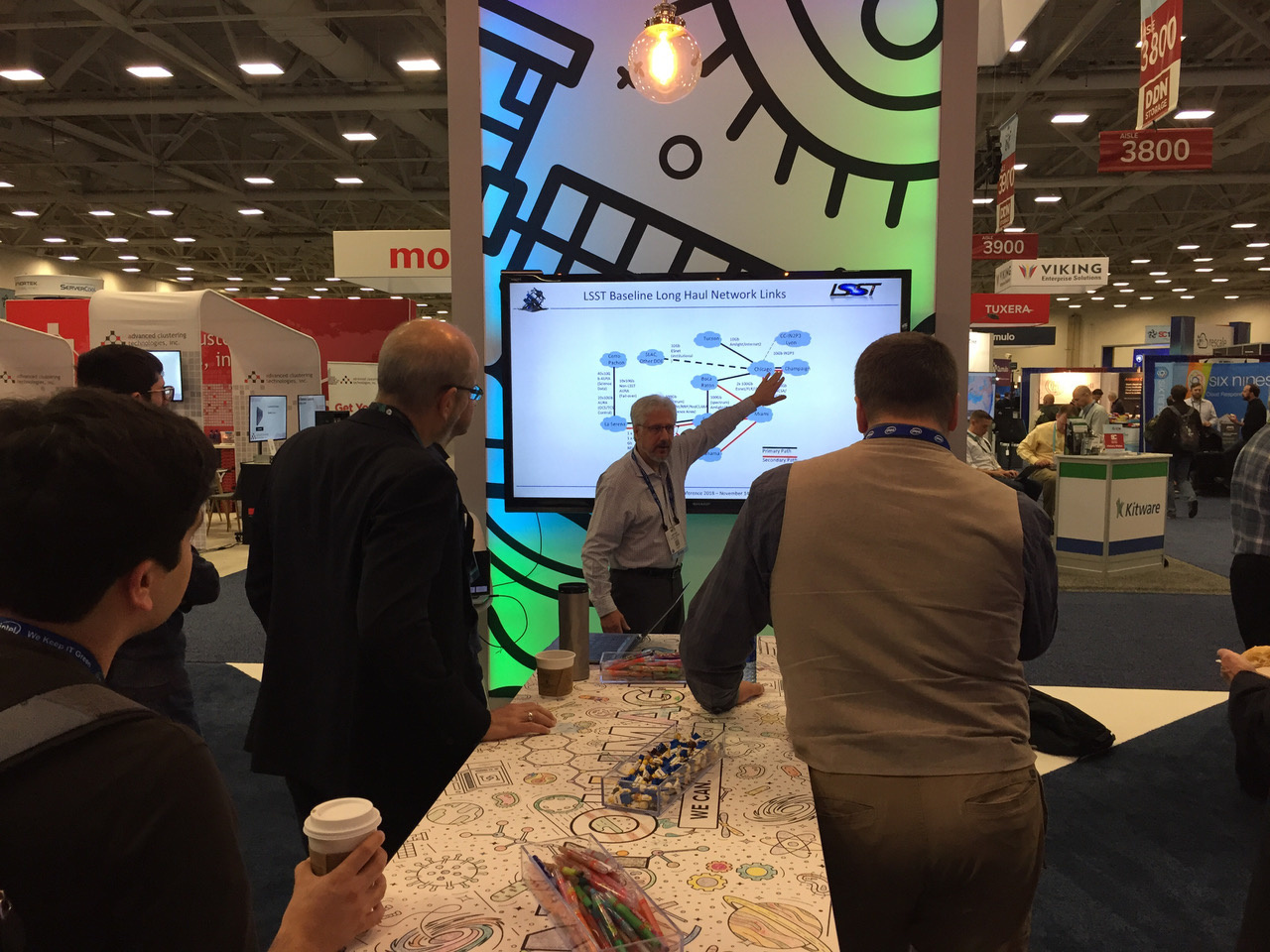 November 20, 2018 - The LSST Network Engineering Team (NET) had a strong presence at the Supercomputing 2018 Conference (SC18) in Dallas, TX, last week, including a successful demonstration of the data transfer capabilities of the fiber optic networks that will be used during LSST operations. Digital data were transferred from the Base Site in La Serena, Chile, to the LSST Data Facility at the National Center for Supercomputing Applications (NCSA) in Champaign, IL. During the data transfer demonstration, a peak rate of 100 Gigabits/second (Gb/s) was achieved for short periods, and a sustained rate of 80 Gb/s was achieved over a three hour period, exceeding the test target. This test was run over links provisioned by several networking organizations: REUNA from La Serena to Santiago, FIU/Amlight from Santiago to Miami, SCInet from Miami to Chicago (Starlight), and NCSA from Chicago to Champaign. SCInet links provided by CenturyLink and internet2 were used to transfer the data from Miami to Chicago because LSST 100 Gb/s links will not be available in that path until FY20. All of the other links were those that will be used by LSST during operations.

Data Transfer Nodes (DTN) configured in La Serena and Champaign with nuttcp (a network performance measurement tool) generated a sustained memory-to-memory data rate over 80 Gb/s, over a period of three hours. Simultaneously, the DTNs, using the Fermilab Multicore-Aware Data Transfer Middleware (MDTM) software, achieved a peak of 36 Gb/s transferring 200 Gigabytes of DECam public data (FITS files) provided by the National Optical Astronomy Observatory (NOAO). Note that in LSST operations, there will be over 20 DTNs (aka archiver/forwarders) simultaneously sending data, so each one will require far less than 36 Gb/s. In addition, on the Champaign end the files were ingested into a GPFS shared file system, and a Jupyter Notebook running an application provided by LSST Data Management was used to visualize the files. Finally, an additional test transfer from Champaign to La Serena is being conducted and has so far achieved a peak of 40 Gb/s, sufficient for the annual transfer of LSST Data Releases to Chile.

Instrumentation in the DTNs and links and Grafana software were used to provide a real-time, web display of network performance during the demonstration. This was monitored live from the NCSA booth at the Supercomputing 2018 Conference. A number of conference attendees witnessed the demonstration and presentation, and participated in a question and answer session.

According to LSST NET Lead Jeff Kantor, "This demonstration shows not only that we have continuity and performance from the network point of view, but also that all of the partners acted as a very well-coordinated engineering team for LSST."

Additional support was provided by a number of other people within these organizations. We are particularly grateful to SCInet, Starlight, and Fermilab for enabling this demonstration.