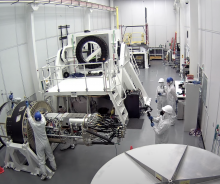 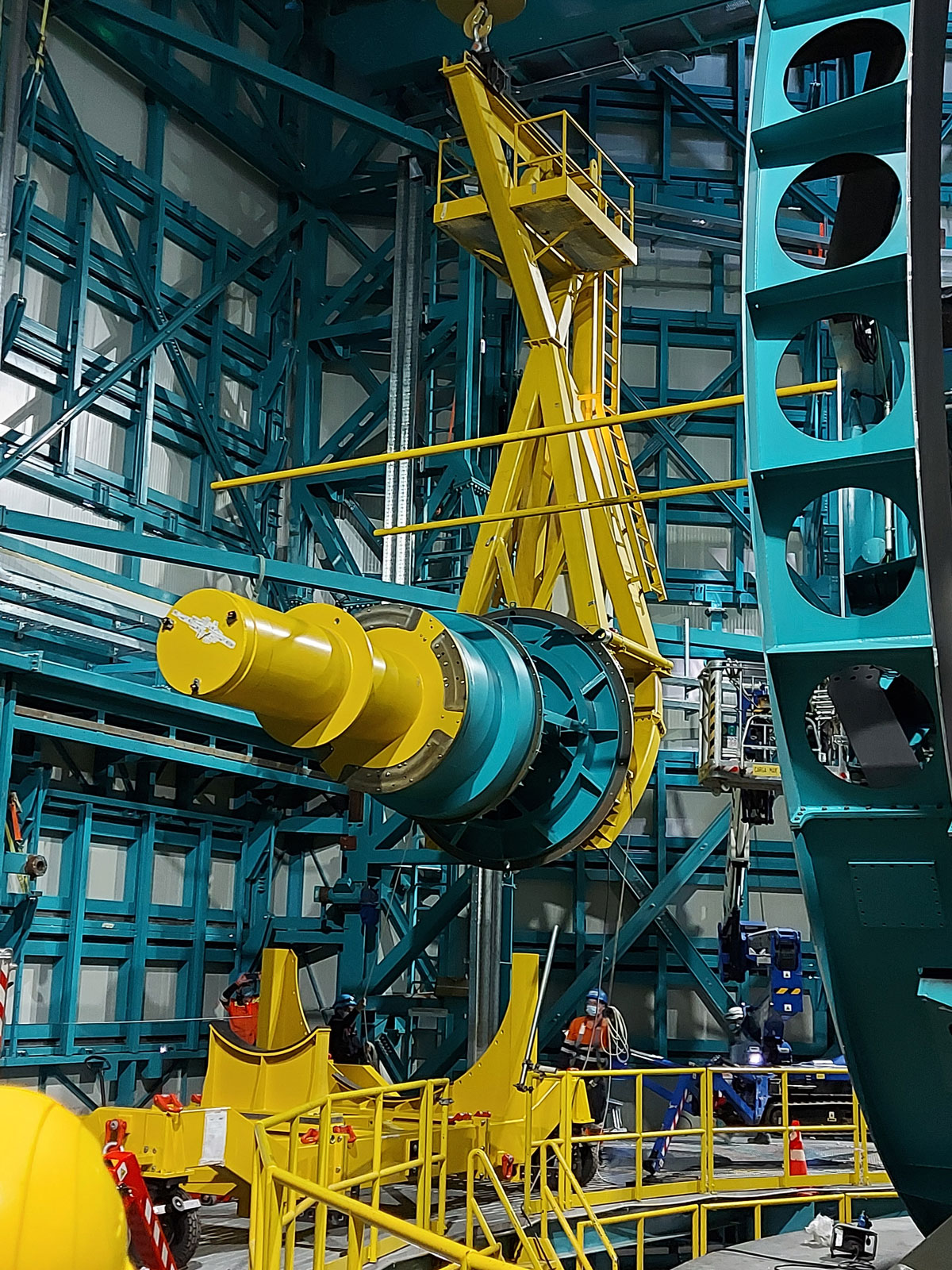 December 7, 2021 - On a sunny day at the end of November, the team on the summit of Cerro Pachón completed the big task—in terms of size and importance—of removing and re-installing the camera surrogate mass from the Telescope Mount Assembly (TMA). The camera surrogate mass is a steel structure that approximates the mass of the LSST Camera assembly, used for testing system interfaces and procedures before  the real, and far more delicate, LSST Camera arrives on the summit.* This procedure was carried out using the bridge crane installed inside the observatory dome, and the camera lifting fixture—a yellow, claw-like contraption that was custom-built for just this purpose.

The first demonstration of the process of removing and reinserting the camera surrogate mass in the observatory was an important milestone in terms of feasibility but also in terms of training for the Rubin team. The company that built the TMA, Asturfeito, performed a similar activity in their factory in Spain in 2018, but since none of the Rubin summit team participated in that procedure this was a significant opportunity to transfer knowledge from the Asturfeito group to the Rubin summit team. A total of about 25 people participated in the exercise on the summit, a combined effort of the Asturfeito TMA team, the dome team, and the Rubin summit team.

One of the challenges in conducting this exercise on the summit is the limited space inside the dome. So prior to the start of the procedure the team carefully reviewed and checked the configuration of the activity. A laser tracker was installed on the TMA, on the center of the surrogate mass standing in for the Primary/Tertiary Mirror (M1M3), to monitor the motion of the camera surrogate during the operation. After that, the TMA was pointed to horizon to position the camera surrogate for removal. Guide rods were attached to the TMA and articulating-boom personnel lifts were installed to ensure safe access to the TMA and camera surrogate during the operation. The camera cart was transported using the platform lift to the 8th floor of the Observatory, and moved in front of the TMA. The camera lifting fixture  was positioned using the dome crane in front of the TMA top end assembly. Then, the lifter was bolted to the camera surrogate to remove it slowly from the TMA. The camera surrogate was rotated manually while hanging on the crane until it was oriented with the camera cart. Then it was lowered onto the camera cart. During the overall sequence, work was restricted in the dome and on the top of the dome to maintain a quiet environment. The next day, the camera surrogate mass was re-installed on the TMA, generally following the same sequence but in reverse order.

The physical process of removing and reinserting the camera surrogate mass spanned just two days, but the exercise took weeks of planning, testing, and installing the necessary equipment. Because the demonstration was also used to train Rubin staff members, some of the steps were repeated, with time dedicated to explain the various aspects of the procedure. The team had used a 3D CAD model to ensure that the process would go as expected, but seeing everything work in reality was a big reward.

The summit team is now in the process of compiling feedback from the procedure in order to identify all necessary improvements, and working on the prerequisites for installation of the Commissioning Camera (ComCam) in 2022. But before the ComCam is installed, at least one more demonstration of the procedure is planned with the camera surrogate. To prepare for that exercise, which is scheduled for early next year, the team plans to modify the shape of the camera surrogate to better match the profile of the LSST Camera.

More photos of this exciting activity are available in the Gallery.

* If you’re confused by all the pieces of Rubin equipment with “camera” in their names, you’re not alone. Here’s a quick overview of  the cameras and camera stand-ins we’re using to  build, test, and operate Rubin Observatory:

LSST Camera - This is the 3200 megapixel camera, built at SLAC National Accelerator Laboratory,  that will be installed in the telescope for science operations. It’s currently at SLAC and will ship to Chile in 2022.

Commissioning Camera (ComCam) - This is a smaller (144 megapixel), simpler version of the full LSST Camera that will be installed in the Telescope Mount Assembly (TMA) and used for testing and commissioning activities prior to the installation of the LSST Camera.

Camera mass simulator - This is one of two camera stand-ins that serve different purposes. This structure was built by the company Moog, and was used for testing and verification of the camera integration stand at SLAC. It approximates the mass and center of gravity of the camera alone, and attaches directly to the camera rotator. It was shipped to Chile in September 2021 to test the procedures for shipping the real LSST Camera.

Camera surrogate mass - This camera stand-in has been in Chile since September 2019; it came from Spain where it was built at the Asturfeito factory along with the TMA. This equipment simulates the mass and center of gravity of the camera assembly (camera + rotator + hexapod), and attaches to the integrator. The camera surrogate mass was used for Factory Acceptance Testing of the TMA in Spain, and is now being used in a variety of TMA testing and verification activities on the summit, including the one described here!